Palentier is an Open Source software that was originally created by me and a good friend (M. Stange) for processing aerial images from un-manned aerial vehicles (UAVs) like the MikroKopter.  Palentier can process aerial photographs into georeferenced and scaled images which accurately reflect the location and size of objects in the real world.  These images can be exported to Google Earth or to GIS software, like ArcGIS, for review and analysis.
Our current attempt is to modify the software so that it could be useable by the KAP community. Several weeks ago, I asked for help with test images and rig GPS data from fellow KAPers. You came through and we now have results from using Palentier with KAP imagery.  The system was tested using data from four places (Northern England, and Northern Libya, Southern Texas, and West Virginia).  All had good results and all but one (West Virginia which I don't have permission to share publicly) are shown here.
Nicholas Kirby provided several dozen images from his KAP work south of Tripoli in Libya.  The building in the photographs is a Roman mausoleum.   Nick provided Qstar GPS data from his location, the kite, and a stationary point (his vehicle).  Primarily the GPS data from the kite was used in Palentier's processing. 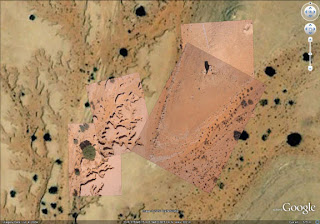 I used a ground based handheld GPS (Garmin) that I carried on my person, to process this aerial photograph of my crews excavating a burned rock feature near Del Rio, Texas. 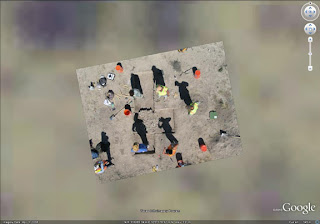 Google Earth KMZ available here (~1.6 Mb)
I'd like to point out that you can realistically measure things in this image using the measure tool in Google Earth.  The excavation unit is four meters long north to south.
The fourth project was conducted near Canaan Heights, West Virginia for USGS biogeographers.  They are using KAP and Palentier to map micro-floral plant communities in wetland environments where other means of mapping are too costly or too slow. ( I currently do not have permission to share their images but will post them here in the future if they grant it.)
Lessons Learned

Palentier was originally tested using Canon cameras.  Canon cameras have a very rich EXIF header that  many other manufacture's lack.  When tested on non-Canon cameras, I found that some of the information about the camera's configuration had to be manually added.  To address this, we added new input fields into Palentier's "Options".  The main parameter that is lacking from non-Canon cameras is the metric sensor size.  www.dpreview.com keeps sensor size information for most modern cameras on the "Specifications" section of its website.

For Palentier to work properly, it needs two things: one, the general elevation of the ground being photographed and two, the approximate height of the camera above that ground. To accommodate for this a new "Ground Elevation" option was added to the software.  We have found a glitch in the code that does not allow for the proper manual selection of the elevation.  Until we can fix this, a temporary work around  is to use the "Altitude Override" option and enter the approximate altitude the camera was flown at.

The test data had only approximate declination information for the camera (which way the top of the camera was point at the time a photograph was taken).  From my own experience this is not unusual because the rig tends to have a lot of play in it as the wind buffets the camera constantly.  To account for this, a "Compass Override" option was created.  Unfortunately, there is a glitch in this code as well, and it does not work properly, yet.  Luckily, the "Compass Declination" option does essentially the same function.  So, this option was used to rotate the images until the approximate north in the photographs matched true north.

The GPSes used in these tests, (i-gotu GT120, Garmin Map 60Cx, and Qstarz)  are only accurate to between 10 and 15 meters.  This low level of accuracy can throw the image locations off a bit.  To allow the user to "bump" the photographs into place, the "Offset North" and "Offset East" options are used.  The user can export a set of photographs, see that it needs to be moved one direction or another, pick the appropriate options and re-export for proper fit.

The biggest issue challenge a user might have with using Palentier and KAP imagery is that it is not fully automatic.  When Palentier is used with MikroKopters or other UAVs, all the data  for geo-location and rectification are automatically generated and the process is as simple as a few clicks of the mouse.  Using Palentier with KAP involves more user input and may require multiple exports to Google Earth as well as fine tuning of parameters in Palentier.  This can be a little cumbersome. Furthermore, since there is lot of variance between individual photographs  taken from a kite, it will often be best for a user to adjust a single image at a time instead of being able to bulk process dozen of images at once.
Palentier does not correct the distortion in photographs.  All photographs have some level of distortion resulting from aberrations in manufacturing and some by design (like fisheye lens).  Distortion is also present in ortho photography when the camera is not pointed straight down.  The nature of KAP (using cheap cameras and wind driven flight) can exaggerate some of these distortion problems.  What this means to the user is that it may not be possible to have every portion of a kite aerial image lineup exactly with Google Earth (but it should still be pretty darn close).  Alignment problems can arise when there is great variability in the elevation of the ground (like when photographing the top of a mountain and the valley below).  We compensate for these alignment issues by processing the images in photogrammetry software, such as Leica Photogrammetry Suite, (which Palentier supports export to) but are not currently directly handled by Palentier.

Palentier is Open Source and meant to be an asset we can all take advantage for fun and in our work. Any thoughts on how to improve the software are always welcome. I am not a very good programmer but I do understand the principals of photogrammetry.  If you are a programmer and interested in further developing the software,  we need your help.

I am very grateful to Nick Kirby and Lindsey Kemp for sharing their aerial photographs and for taking the time to collect GPS data from their rigs.  You are both awesome and your help is genuinely appreciated. Thank you!
Posted by Mark at 9:20 AM